The Secret Life of a Prototype

The Secret Life of a Prototype

A Prototype is a Passion

Prototypes are interesting business.  We’ve done so many of them here at PTI that it has become old hat.  Big prototypes, small prototypes, complex prototypes, simple prototypes, the list really goes on.  I tend to think that it is a pretty misunderstood market as many people hear the word “prototype” and get the image of James Bond’s Q working in a high-tech lab designing some fancy watch that turns into an airplane or something…and has rockets.  Not that that wouldn’t be cool and all, it just doesn’t tend to mesh well with the reality of prototypes in the modern industry.  Despite not having the allure of 007 noir, prototypes are still one of the most interesting and engaging projects that an engineer can get their hands into.  There are few things we love more here at PTI than getting the opportunity to put together something that is the first of its kind.  Much to our chagrin – at least in our marketing department (me) – we aren’t able to really show off much of the prototype work that we do.  That’s just kind of the nature of the beast.  Most of our clients don’t want their prototypes shown around until they are good and ready to launch the product to market, and by that time the original prototype probably isn’t something you would show around as opposed to a fully finished production unit.  So what’s with all the secrecy?  What is the secret life of a prototype?  Would you even know one if you saw it?  Here’s what we can tell you without getting lawyers on the phone or sending out a hit squad.

In all reality, prototypes usually aren’t pretty.  By definition a prototype is basically a Frankenstein of parts that are screwed, glued, duct taped, or welded together in order to do nothing more than one thing: prove a concept.  It doesn’t really need to do more than that.  Certainly there are cases where proving a concept means withstanding some abuse, but even then the goal isn’t usually to look good doing it.  Unless the unit is intended to be on display, cosmetics tend to take a backseat to functionality.  With all of that in mind, it’s no surprise that in the automotive world prototypes are often referred to as “mule vehicles” or “test mules”.  The prototype – whether it’s a vehicle or anything else – is a physical build of a concept and is meant to prove whether or not that concept is viable in the real world.

I’m going to go ahead and say that the automotive, construction, and off-road industry have the market cornered on cool prototypes.  Allow me to justify this statement…lets consider someone like Apple or Samsung.  When they build a prototype of a new smartphone, it fits in their pocket.  Keeping it concealed isn’t exactly complicated.  If they really wanted to get crazy, and it wouldn’t surprise me if they did, they could put the thing in a locked case and handcuff it to a transporter who was surrounded by armed guards.  Not only would that be effective, but it would also be a really cool story to tell your friends outside of work when you felt like bragging about your job.  Even making a prototype of a TV or kitchen appliance doesn’t require you to take the thing outside for testing and such.  You can keep it in a secure area of your facility, plug it in and see how it works.  When you’re building a prototype of a new sedan, sports car, bulldozer, or tractor it’s a completely different story.  We’re talking about major players in a multi-billion dollar industry all refined to the point where they are competing for even a sliver of advantage over their competition.  Add on the fact that their prototypes must be taken out in plain site in order to be tested, thereby exposing painstakingly achieved improvements to all kinds of prying eyes.  When these companies introduce a new product to the market, they are basically exposing all of their improvements to the world in one fell swoop.  They’re new ideas become immediately visible to excited consumers and curious competition alike.  If the competition sees that these improvements are swinging the market a new direction, then they will start to follow, and perhaps even enhance, these improvements in their own product.  That window while the consumer is enthralled and the competition is catching up is where a company really enhances their brand and maximizes market share.  They have likely invested large sums of money to get that window open, and they aren’t likely to spoil it by letting the competition get eyes on their new baby before they’re ready.

Ah, now the really fun stuff.  So ask yourself; what would you do if you had to keep your car a secret but still drive it around town?  What if it was a tractor?  An excavator?  A crane?  These aren’t things that are easy to hide in plain site.  Especially with something like construction or farming equipment, the equipment needs to be tested outdoors and it also has to be transported.  In order to combat these challenges, manufacturers have come up with some pretty interesting solutions.  You may never look at a prototype the same again.

Have a look at the beauty on the right.  Nice ride, huh?  Sadly, it looks like my first car.  What a shameful heap that was, not even worthy of the road.  I know many people have fond memories of their first car, but alas I do not.  This one here seems like it would pretty much fall into the same category of reprobate vehicles that any self respecting teenager would try to avoid…that is, if they don’t care for driving one of the world’s most elite sports cars.  That car on the right is a prototype of one of Ferrari’s most advanced designs.  Clearly, the body is exactly anything to write home about, but that’s intentional.  The whole deal is meant to run incognito.  The engineering is all under the hood and the chassis.  The body is put there just so that anyone who would normally know what they’re looking at, won’t know what they’re looking at.  Don’t be surprised if some obvious feature of that body is just there to be confusing too.  It wouldn’t be off-character for one of these manufacturers to throw some bazaar feature on the body just to get others guessing about what it could be when it is actually nothing at all. 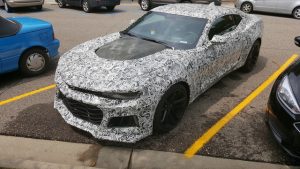 Now have a look at this fella on the left here.  Can you tell what that thing is?  More importantly, can you really tell how the lines come together to make a whole body structure and look for the car?  If you can’t, then these guys have done their job.  This is actually a pretty advanced prototype.  By the time a manufacturer is well on their way to having their initial design concepts refined and the car needs to hit the road for some more extensive real-world testing.  This could actually not be a prototype at all, but rather a limited production build or LPB as it’s referred to in the biz.  The idea here is they’ve probably done all the concealed track testing that they can do and now they really need to get the thing on the road for real-world traffic conditions.  This means that people are going to see it, no two ways about it.  So they skin the car with this sort of design camo that kind of fools the eye in terms of how the lines and form of the body really look.  You can kind of tell, but not really enough to go anywhere with it.  Even up close, these things are so trippy to the eye that you’re best to just look away before you get motion sickness.

Those in the construction, agriculture, forestry, and related equipment industries don’t get it quite so bad.  They still have to keep their secrets but they can usually get away with tarping over the really secretive components during transport and testing or cover the thing entirely.  While those respective industries certainly don’t get as much clamor over “body style” their advances in systems and function tend to be much more obvious to the naked eye.  This simply means different measures need to be taken in order to keep would-be gawkers at bay.  Don’t be surprised if you’re driving down the road some day and you see a tractor in the field with a bunch of bulky coverings on it or an excavator at a construction site that partially tarped over on a regular basis.

So what’s the point here?  Well I’m not really sure there is one, other than to provide an interesting read on prototypes and what they’re all about.  Certainly we could go on forever about different prototypes within different industries.  In the end, a prototype is there to keep you honest.  A big idea is great and I would hope that nobody out there is too scared to test out a vision they really believe in.  When you make a prototype for that vision, you’ll find out just how realistic it would be to bring it to life and function in the real world.  You can’t imagine the things you will learn along the way…and also, who else might be watching.

Have a Project? Challenge Us.
Back to Top