A Story from Area 51

A Story from Area 51

This is not an alien or UFO article.  As fun as that would be, I’m not sure it would really fit in with the whole business model we have here.  So why tell a story from Area 51, here?  Well, we’re always talking about new technology and how it’s protected, intellectually that is.  As far as prototypes, new technology, and secrecy goes, it’s tough to top Area 51.  I’m not saying there aren’t places that might do it, I’m just saying it’s tough. 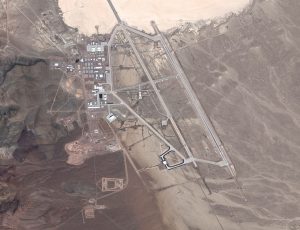 For those who aren’t in the know, Area 51 is one of the United States Military’s most secret research and test sites.  Hidden deep within the Nevada desert, the base was a birthing ground to many of the Air Force’s most advanced planes.  The U2 Spy Plane, F-117 Stealth Fighter, B-2 Stealth Bomber, Oxcart, and the SR71 Blackbird are just a few of the aircraft that have been developed at Area 51.  All of these aircraft were highly classified and their development performed with the utmost of secrecy.  Considering projects like this can range from hundreds of millions to billions of dollars, it’s no surprise that Area 51 takes privacy very seriously and doesn’t fool around when outsiders are required to pay them a visit.  In my mysterious and smoky past, I encountered one such outsider.  He told me a story cloaked in secrecy and dripping with danger.  I’m putting myself at risk just repeating it…

Okay, actually my past is neither mysterious nor smoky and the guy was just someone I used to work with at a previous job.  There’s nothing secret about this story at all and I am in no risk by repeating what was told to me.  Also, a forewarning, this story is more informational and lacks a dramatic climax.

So, believe it or not, Area 51 is a lot like any other structure that’s occupied by humans.  At the end of the day the AC has to work, the windows need to be cleaned, the floors need to be swept, and new equipment has to be installed.  The military does some things really well but not everything and that means they need to call in outside contractors from time to time, even at Area 51.  In this particular case, it was a paint booth.  My friend, let’s call him Fred, was contracted to bring in a paint booth and set it up for the good people of Area 51.  As he described it to me, this is how the process worked: He and his crew met a driver at a remote parking lot not far from McCarran Airport, kind of in the middle of nowhere.  They parked their cars and piled into the driver’s unmarked van.  Once inside, they could not see out.  The windows were blacked out and a solid divider placed between Fred and his companions in the back and the driver up front.  The driver communicated with them via a small intercom.  The temperature in the van was pre-set to 72 degrees F.  The ride lasted about ninety minutes and although Fred and his crew could tell that they had been turned around several times, they had no idea which way they were facing by the time it was all said and done.  Eventually the van slowed down to a stop and the engine was cut.  The driver opened the doors to Fred and his team who immediately saw two heavily armed guards waiting for them right outside the van.  Fred and his team were invited to step out of the van and gather in front of the armed men for a bit of an orientation meeting.  Fred could now see that the van had pulled into a huge hangar and the door had been shut behind them.  Once again, there were no windows to see out of.  Fred and his team had been visually quarantined from the inside of the van to the inside of a huge, windowless hangar.  They now stood on the shiny concrete floor, lit by the humming of large industrial lighting overhead.

The superior ranking guard explained the rules for how Fred and his team would conduct themselves during the installation of the paint booth.  It was actually pretty simple.  They would be under close supervision the entire time by armed guards on site and video monitoring from an undisclosed location.  At no point, under any circumstances, were Fred and/or his team to leave the hangar.  There were bathrooms available right within the hangar and when they were needed a guard would be waiting outside until the occupant was finished and returned to work.  Meals would be brought to Fred and his team, which was a good thing because they would be working twelve hour days.  If they needed anything, for any reason, they were to approach a guard and make their request.  The staff at Area 51 would take it from there.  They would work all through the day and, at the end of the day, they would pile back into the van for the blind, winding, ninety minute trip back to the parking lot in the middle of nowhere.  Violations of any of this protocol would result in the strictest of consequences.

As I said, this story doesn’t really have any kind of a climax, it’s just an interesting tale about how far some organizations will go to protect the secrecy of developing projects.  It has been said that even people who work at Area 51 don’t even know exactly where it is.  If you asked them to drive there, they couldn’t do it.  Area 51 has been required to master the art of secrecy.  Quite frankly, I’m not certain that anybody really knows exactly how far they have gone to protect the secrets they are currently working on.  On that note, I’d like to leave you with this thought:

If you’re not familiar with Ben Rich let me tell you that he was the former director of Lockheed Martin Skunkworks.  LMS did pretty much all of the R&D for Area 51 and Ben Rich had probably as much access as anybody.  Ben Rich wasn’t just an engineer he was the engineer, the brains behind the development of numerous black projects at Area 51.  Ben Rich is often mysteriously quoted as saying that we already have the means to travel among the stars, along with just about anything else you can imagine. Unfortunately, nobody can really substantiate this quote so it’s just hearsay for now.  However, imagine this: the B-2 Spirit Bomber is the last project to come out of Area 51 and Lockheed Skunkworks that was a big secret, and it’s now open knowledge.  That plane took its first test flight in 1989.  The F-117 took its first flight in 1981, the U2 in 1955, and the SR71 in 1966.  If you count a few other developments in the 70’s, LMS has basically gotten something new out the door every ten years or so.  After 25 years and with Area 51 and LMS still well up and running, one has to wonder: just what else have they been able to keep a secret?

Have a Project? Challenge Us.
Back to Top